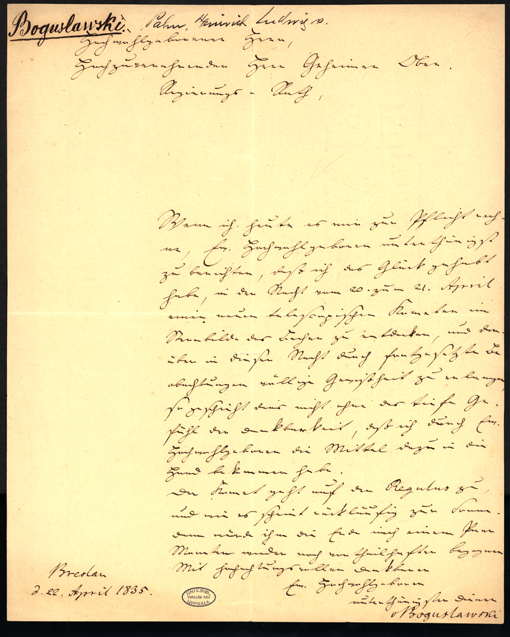 The early universities carried out most of their dissections on animals, particularly pigs and dogs. There were no human dissections in the early period due to restrictions placed by the Roman Catholic Church; cadaveric dissections were introduced in the late 13th century initially for legal purposes – determination of death. These led to the regular use of human cadavers in medical instruction. Later, prisoners who were executed were permitted to be taken for dissection, but no other human corpses were allowed. This was still the case in the 17th century and the constant need for human bodies for dissections at the university is quite drastically illustrated by this letter, addressed to the mayor and the council of the city of Braunschweig. It was important to seize the opportunity when there was going to be an execution in the neighbourhood. In Uppsala in Sweden, for instance, dissections at the anatomical theatre were rare indeed, due to the lack of bodies available. 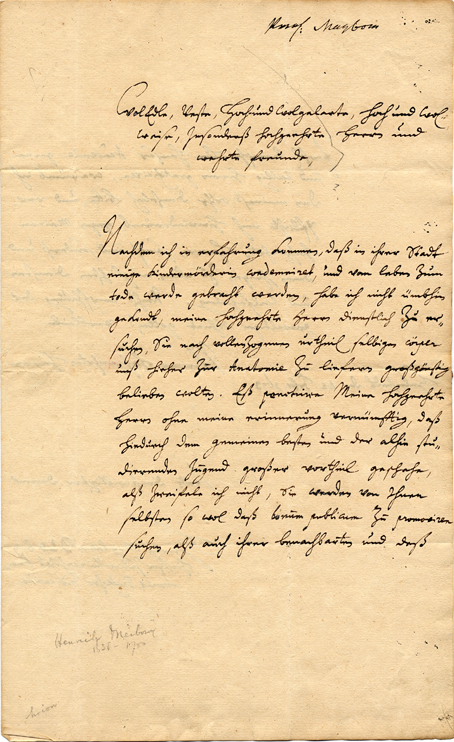 First page of the letter

Very Noble, Highly learned and Very Wise, especially Honoured Sirs and dearly-loved Friends,
Having heard that in your town a child-murderess has been condemned to death, I must humbly beg the worthy gentlemen to be good enough to hand over the body to the dissecting room after the sentence has been carried out. I do not need to remind you that this is for the common good and will be a great advantage to the students; also I do not doubt that you yourselves desire to promote the public welfare and that of your neighbours and will willingly gratify the desire of the Academy of the House of Brunswick-Luneburg and I herewith bind myself to render any possible service to you gentlemen, in return.
Commending you to the mighty power of God
Your very humble servant

Hinrich Meybaum, Doctor and
Ordinary Professor of Anatomy at the
Julius University

Heinrich Meibom the younger (1638-1700) belonged to a German family of several distinguished learned men. His grandfather Heinrich Meibom the elder (1555-1625) was professor of poetry and history at the University of Helmstedt and poëta laureatus in Praha. Marcus Meibom (1630-1711) was employed for some time by Queen Christina at her library in Sweden, and later became librarian in Copenhagen (1653-1663).
Heinrich Meibom (the younger) was in 1664 appointed professor of medicine at the University of Helmstedt and in 1678 he was also appointed professor of history and poetry. In this later position he edited a great number of his grandfather’s historical works. As a professor of medicine he was regarded to be one of the most distinguished physicians of his time. In 1666 he discovered the tarsal glands, the so called glandulae meibomianae, the sebaceous glands embedded in the tarsal plate of each eyelid. 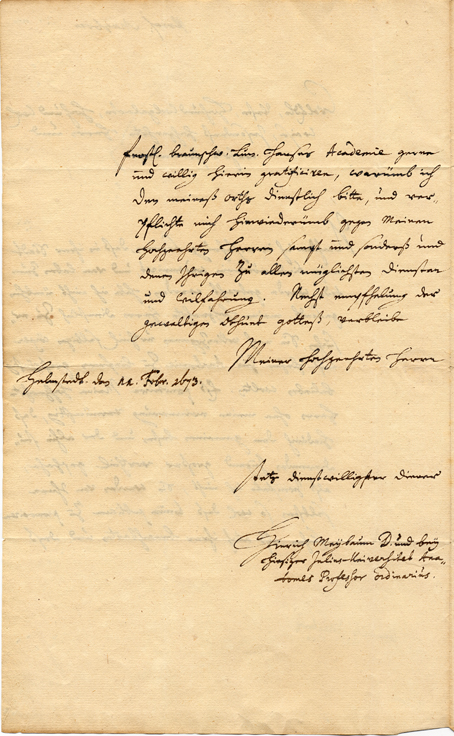 Last page of the letter

The document is written in French and states that after supper Rømer will proceed to observatory to watch the two eclipses of the moons of Jupiter. The addressee is invited to join him in his observations. The document is dated September 18th [1679]. 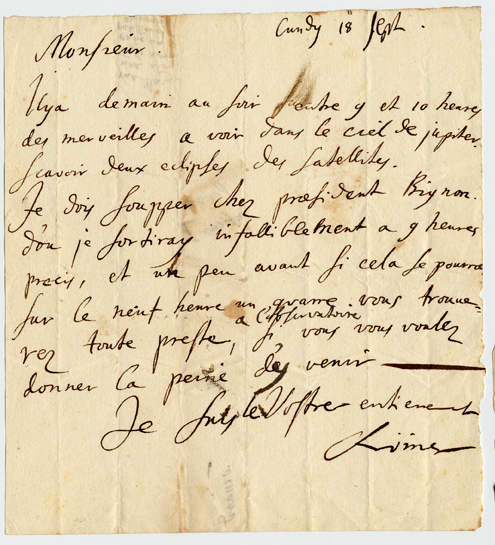 Ole Christensen Rømer (1644-1710) studied under Rasmus Bartholin at the University of Copenhagen from 1662 to 1671. Between 1672 and 1681 he worked at the Paris Observatory, where he made the observations that led him to conclude that the speed of light was not infinite. Having returned to Copenhagen in 1681 Rømer took up the post of professor at the university, to which he had been appointed in 1676. In Copenhagen Rømer built observatories and made instruments (e.g. the meridian circle), standardised measures and weights, and saw to it that the calendar reform was introduced in 1700. G. D. Fahrenheit’s thermometer was inspired by one made by Rømer. He became chief constable and mayor of Copenhagen (1705).

Among his acqaintances and correspondents in the scientific and scholarly community were Christiaan Huygens, G. W. Leibnitz, John Locke, John Flamsteed and Edmund Halley. The rivalry between J-D Cassini and Rømer is well documented. Rømer twice, in 1681 and 1699, married into the influential Bartholin family.

Nicolas Toinard (Thoynard) (1629-1706) was a French antiquary proficient in ancient languages and a numismatist. He published a Greek concordance to the gospels and dissertations on Lactantius and Roman medals. As seen from Waller Ms dk-01906 he seems to have had some knowledge of cannons and guns. He was a friend of John Locke, whom he met in Paris in 1677. It was through Toinard that Rømer made Locke’s acquaintance.

Other Rømer documents in the Waller Collection